It is true that the shortest route between two points is a straight line and that straight lines seldom occur in nature. It is also true that something magical seems to happen when we create a straight path; even more so when this path is flanked with rhythmically spaced trees or rocks. The resulting avenue makes a strong statement about its creators’ command of the landscape. It also embodies the locations at either end with significance. The establishment of the line between them defines them as locations separate from the areas that surround them; they become an origin and a destination. Because we evolved in natural landscapes with bumps, curves and asymmetry, we are not good at judging sizes and distances along avenues. This means that our sense of how long it will take to travel along an avenue isn’t accurate, which in turn results in a sense of warped time. In addition to this, if someone has played a trick on us with false perspective, we can be fooled into believing that objects at the end of the avenue are closer or further away, larger or smaller than they actually are.

When we stand at the start of an avenue, our eyes are instinctively drawn along it to the vanishing point, that place where the path and its flanking trees or rocks appear to converge. This produces a desire to move along it. Typically, where avenues are used as an approach to an important structure, such as a burial mound or mansion, this feature is placed at the focal point, thus using the avenue to constantly pull our gaze to it.

What narrative does this convey to the person travelling along that avenue? Well, firstly, on encountering the avenue he will be very aware that this is not a natural landscape and that it belongs to someone. Whoever owns it has the time, money and power to oversee its transformation and they put great importance in what lies at the end of it. As the destination is visible from the start of the journey a possible feeling of trepidation might be generated as this important site is approached. The narrative this creates works well if the objective of the avenue is to elevate the status of the location at the focal point. However, there are other ways of using avenues to develop different narratives.

Brendon Walker designs theme park rides. To aid this work he has sought to understand what it is that creates a thrilling ride and, in doing so, has developed the Walker Thrill Factor. Through analysis of interviewees’ responses to questions about a thrilling experience that they had had, Walker determined that a thrill comprises of a period of anticipation followed by a sudden burst of stimulation (a trigger). These two elements, when brought together with the correct timing, result in an emotional response that exceeds that which occurs if each element were encountered separately.

When we consider this in the context of an avenue, we can see that, while this is good at building anticipation, the location of the destination in plain view at the end means that there is no trigger. In other words, by giving away the punchline at the start, the joke is spoiled. However, by siting the destination out of sight of the avenue, a trigger can now be created. An example of where this occurs is the approach to Stowe House, Buckinghamshire, UK. As can be seen from the illustration and animation below, this results in the building being revealed in a far more dramatic way than if it had been on view from the beginning.

This is taken further with the approach to the biomes at the Eden Project in Cornwall, UK. These iconic structures, which house the mediterranean and tropical plants of this garden, are hidden from view in what was a disused china clay pit. From the car park to the admissions building they remain hidden until, having paid, the visitor exits the building and they are dramatically laid out in front of them. A zig-zagged path leads the visitor down into the pit and towards the biomes. The arrangement of this path reduces the steepness of the decent but also allows the biomes to be rhythmically hidden and revealed, each time a little closer. Thus, in this approach sequence there are a number anticipation stages and triggers. The visitor’s initial frustrations at wanting to to see the biomes are heightened before the view is revealed to them. Then, they are teased with views of the biomes, which heightens their frustrations at wanting to get to them, before they finally arrive at their destination. 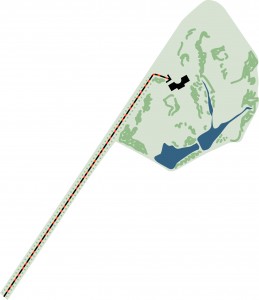 The Approach to Stowe Landscape Gardens 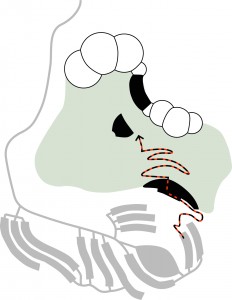 The Approach to the Eden Project